THE CROSS Inn at Finstall has been awarded the prestigious ‘Pub of the Year 2019’ by the Redditch and Bromsgrove branch of CAMRA (Campaign for Real Ale).

The team went down to the popular hostelry to present licensee Ryan Carr with his certificate.

The Cross closed suddenly in the summer of 2017 after the previous landlord left.

Black Country Ales bought the pub and, after an extensive refurbishment, it reopened in April last year.

Since then Ryan and his team have worked tirelessly to re-establish the pub, serving seven ales plus real ciders of a very high and consistent quality.

To judge the pub of the year, CAMRA members submit their beer scores throughout the 12 months when visiting different venues.

Those scores, together with other factors such as the general atmosphere and feel of a pub, a friendly welcome, and community events, all go towards the final decision on which pub wins it. 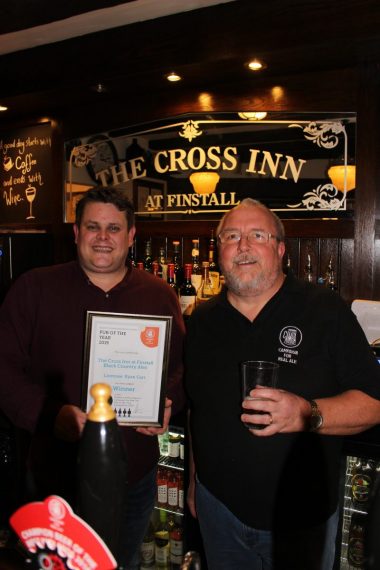 Gez Quinn, the chairman of RB CAMRA, said: “The Cross Inn scored highly in all of these areas and we congratulate Ryan and his team on their achievement.”

The Coach and Horses in Weatheroak came second and The Hop Pole in Droitwich was third.

“CAMRA members are already on the lookout for next year’s winners – a tough job but someone has to do it,” added Gez.