HELPING organise the send-off of music legend John Bonham will be one of the many lasting memories funeral director Ray Giles takes away from his 55-year career when he retires tomorrow.

After being born and bred and going to school in Bromsgrove he started at his family’s firm James Giles and Son when he was just 15.

Prior to that, from the age of seven, he would help out by making tea and coffee for employees and would have days off school to travel around the country helping with funerals.

He said: “My parents would send a letter in saying I was ill but the teachers knew – next day they would ask me with a smile ‘where did you go yesterday?’.” 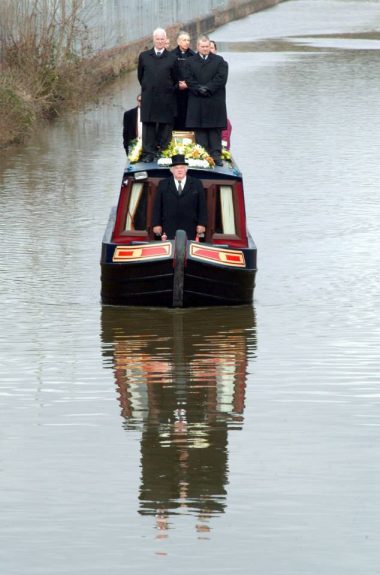 During his career he has undertaken some memorable services.

As well as the Led Zeppelin drummer’s farewell, he recalls one where the coffin arrived and departed on a canal barge and some with vintage motorbikes.

Ray has also seen a lot of changes over the years.

He said: “We only had one phone and that was at our office where my uncle Fred lived.

“If someone passed away in the middle of the night, he would come around with the line prop and tap on the window to wake us up and we would go out in all hours and weathers.

“It was worse in the winter because the cars did not have heaters in them so you would be wrapped in layers and blankets.”

Ray also remembers the business having a crate of Davenport’s and a bottle opener on a string out the back.

“That was for the local beat bobby who was working late – he would pop in for a beer and then get back out there.

“At Christmas time we always laid out a table of food for police officers and ambulance staff to come and have when they could grab a moment from their shifts.”

Another change has seen machines which shape the coffins introduced, replacing the past technique of repeatedly boiling kettles and using the steam to shape the wood.

There have also been changes to funeral ceremonies.

“Back then it was all religious services with hymns whereas now we have civic celebrants and the choice of music is more varied – a lot of families lead them themselves and we are more the co-ordinator than the organiser.”

One of the hardest times for Ray has been these last few months.

“Covid-19 has not only meant we have had to make adjustments, like screens in the limousines, but it has also been a horrible experience for those who have lost loved ones.

“All the families have been fantastic, the way they have adapted and accepted the circumstances has been amazing.”

Three years ago James Giles and Son bought out A Dyer funeral directors in Studley which Ray said was a wonderful step forward for the company.

Away from the business Ray married his wife Jacqueline in 1974 and the pair went off on holiday to Paignton at the Silver Sands Hotel.

Jacqueline spends most of the year at their home in Antigua now and, during his retirement, Ray will be joining her and also spending most of his time there.

He does have other plans though for when he is back in the UK.

He hopes to start a ‘Conveyance with Dignity’ business where he will ensure people are cremated and conveyed personally by him around the UK or from abroad if people need repatriating.

Ray puts the compassion, caring and ensuring everything is done with dignity down to the reason James Giles and Sons has been here for 104 years.

He said he knew now, at the age of 70, it was time to retire, knowing the business was in the safe hands of the family.

“I would like to thank all the families we have dealt with over the years.

“It has been an honour and a privilege to be there for them during some of the most difficult times in their lives.”