BROMSGROVE had its longest ever Remembrance Parade today with more organisations than ever before wanting to be part of the annual event.

Among them were a number of young people’s organisations including the Bromsgrove Girls Brigade taking part for the first time.

At the monument at Crown Close there were also more standards than ever before – 17 in total and 13 of those from youth organisations.

After the Exhortation the standards were lowered as an impeccably marked two-minute silence took place. 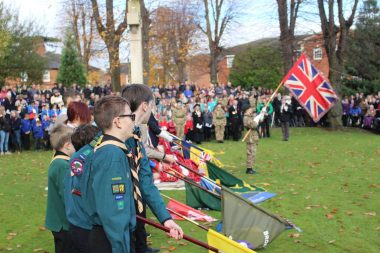 The council had closed off the road and the silence was only broken by the poignant chiming of the St John’s Church bells to mark 11 o’clock.

The Kohima Epitaph was given and wreaths were laid by the Royal British Legion (RBL) and other military organisations, one on behalf of the MP and political parties, community organisations and local businesses.

Rev Ray Khan, the vicar of St John’s and chaplain of the Bromsgrove RBL spoke about the importance of British values being taught in schools – promoting mutual respect and tolerance of those with different faiths and beliefs and those without faith.

He said none moreso was it apparent than in the Armed Forces where people from many different backgrounds served together for a common cause.

He quoted former American President Abraham Lincoln who said when there were divisions, people could not look to political parties or leaders, it had to start with everyone. 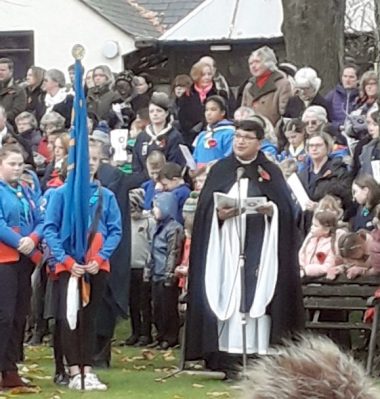 He said the best way for differences to be healed was for people to show respect for each other and to stand together against those seeking to divide.

“In doing so we can once more bring to life those values that are worth defending and sacrificing for.”

He concluded his speech by saying: “Today we remember and honour all those who laid down their lives in service for not just this country but for friends and for the values that underpin our nation.

“When Allied troops liberated the concentration camps in Nazi Germany, they were not just outraged, they saw and experienced the huge differences in the values they held and the evil of the Nazis and Fascism.”

This year Remembrance Sunday commemorated the 75th anniversary of the D-Day Landings.

When the parade had concluded a second service was held at St John’s Church to remember those who gave their lives in the Boer War and the First World War – wreaths were laid at the memorials in the church to those two conflicts.

Also on parade today was Deputy Lord Lieutenant Patricia Bradbury who has attended Bromsgrove’s annual commemorations for the past few years.

She said: “Seeing the young people here has been very powerful.

“We have to work harder in the future to attain and maintain peace and they are the future.

“It is heartbreaking how many people have lost their lives through war over the years and for those who come back broken with post traumatic stress syndrome.

“We sang Make Me a Channel of Your Peace today – it is a poignant message and we need to take it forward.” 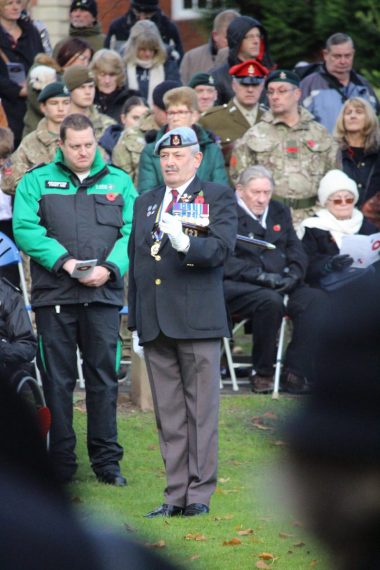 Patrick Smith, the chairman of the Bromsgrove Royal British Legion, said: “The size of the parade was the most memorable thing for me today.

“The fact so many people want to be involved is tremendous and it is fantastic the youngsters want to be part of it and keep the memories alive of those who have made the ultimate sacrifice.”

Tonight a Remembrance Concert will be held at Bromsgrove’s Artix where the town will prepare to  ‘party like its 1944’.

Following the success of last year’s ‘Battle’s Over’ concert another extravaganza has been lined up for the evening of Remembrance Sunday.

Taking to the stage for the ‘Albert Hall Tribute’ will be Vintage Class, Kevin Ward, Fairfield and Music from Glen Miller.

Catherine Tabberner who broke the decibel record at Artrix last year with her rendition of Rule Britannia will be returning.

There will be also be a special appearance by ‘Mr Churchill’ for the Drum Head Ceremony to bring back memories of 1944.

And there will be a video of Betty Webb who played an important role in the Second World War as one of the code-breakers at Bletchley Park.

She will be talking about what she and her colleagues were tasked with doing at the time and events leading up to D-Day will also be explored on the night. This year mark’s the 75th anniversary of D-Day.