THE FIRST Walking Football session held in Bromsgrove yesterday was held yesterday with nine players turning up to play the Beautiful Game. 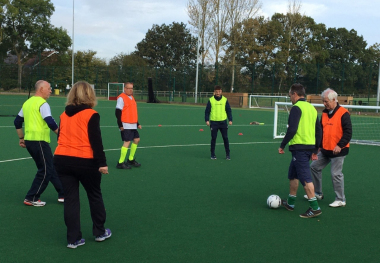 With Ben from the Worcestershire FA joining in on the astroturf at Bromsgrove Hockey, Cricket and Tennis Club, there was enough for a five-a-side game.

Alan Gormley, who started Walking Hockey in the town,  is vying to make Bromsgrove a centre of excellence for Walking Sports.

He said the session went very well and there was a good mix of men and women playing.

He thanked The Standard for supporting the drive and Chris Wells from the council who came to give the group ten footballs, cones and two sets of bibs.

Phil Baker from Bromsgrove Sporting also took part and it is hoped there will be a link-up with the town’s football club.

“Ben from Worcestershire FA said the turnout was very good for a first one so that was encouraging as well,” added Alan.

Tomorrow (Thursday) from 10.30am to 11.30am there will be the first daytime Walking Hockey session

It is hoped a pilot event will run in February with a view to starting full sessions in the spring.

Alan is also planning to meet with Bromsgrove Cricket Club about a slower version of that sport.

Alan joined us on last week’s Standard Podcast to talk about the walking sports and making Bromsgrove a centre of excellence for them.