A QUICK-thinking Bromsgrove woman has been hailed a hero after giving her colleague life-saving CPR.

St John Ambulance volunteer Flora Streeter was working at the Capital Tower in Lambeth when her colleague, Simon Lea, started to feel ill.

Flora, aged 22, said she spotted Simon, 62, ‘looking pale’ when he returned to his desk with a coffee.

“I knew something was wrong because he had just come back from holiday.

“I went over and found him to be very sweaty, telling me he felt ‘weird’ and had chest pains.”

Knowing Simon had suffered from a heart attack a few years ago, Flora, who is trained in first aid, decided the best solution was to call an ambulance.

Within minutes paramedics arrived and confirmed Simon was having a heart attack.

Luckily his condition was stable enough to take him down a lift and out of the building.

Only Flora and one first responder could fit in the lift with Simon due to its small size.

But as they reached the ground floor, Simon suddenly went into cardiac arrest.

“We moved him out of his chair and put him on the ground,” said Flora.

“I started the first round of CPR while the responder used the defibrillator to shock his heart back into rhythm.

“I was half way through the second round of CPR when Simon came around.”

He was then taken to St Thomas’ Hospital where he had a stent fitted for a blocked artery.

“If this had happened the week before I would have been in the middle of a 200km bike ride in Cuba,” said Simon.

“I was very fortunate to be where I was and to have Flora there to recognise I was having a heart attack.

“She saved my life along with the amazing London Ambulance Service team and the doctors and nurses at St Thomas’.”

Simon returned to the office last week and presented Flora with a cake and a donation to St John Ambulance to thank her for everything she did for him that day. 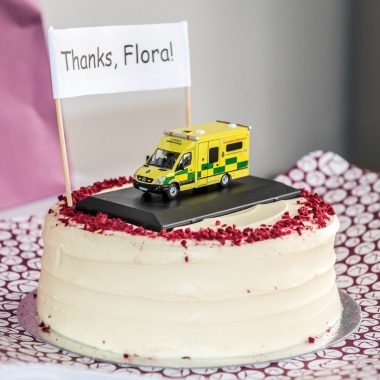 Thanks Flora – Simon brought cake into work after recovering from his heart attack.

Visit http://www.sja.org.uk for more information on St John Ambulance, including how to make a donation, volunteering opportunities and details of training for the public, schools and businesses.