BROMSGROVE Sporting FC now has a women’s team after its application was approved by Worcester FA, writes Shazad Hussain.

Preparations for the club’s non-league debut in September ahead of the 2020/21 season are already under way.

The club had a women’s team when it started in 2010 but it folded for various reasons.

Club director Alan Horton, 63, said: “When Bromsgrove Colts first merged with Bromsgrove Sporting, I got involved with the one ladies team for the Colts and I went along to coach them.

But because of things that went on the team started to fold.

“There were some really good players but we hadn’t got enough people to take it on board.

“We’ve just started getting it all back together now because I honestly believe the ladies of Bromsgrove deserve the opportunity to play for the local community club especially if you go around to Stourbridge, Halesowen, Redditch all these places they have ladies teams.”

The club has brought in a few coaches including FA mentors as well as expert coaches to ensure the team is as prepared as possible for the first season.

Setting up the women’s side has not come without its fair share of challenges – one of them was the search for women who were interested in playing football.

Mr Horton, added: “I had to find the ladies, that was the biggest issue.

“I’ve got quite a good mix of ladies now and the first training session we had 21 and we’ve now got a regular 17.

“Bearing in mind, I’ve started really early because you don’t start creating teams until May so what I wanted to do is give everybody the opportunity to learn.

“I have ladies ring me up regularly every other couple of days, loads of texts and emails, who want to come down and have a trial and I won’t turn anybody away.

“I’m happy to take on any girl who wants to have a go but also what I’m trying to create is coaching positions, first aid positions, so just because you can’t make it in football doesn’t mean you can’t get involved in my Sporting ladies team.” 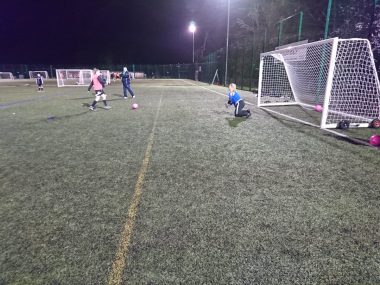 The ladies team, who are set to play their home games at the Victoria Ground, is said to have been built in the same image, with the same principles and same effort as the men’s team.

“We’ve seen how far the men’s team has progressed in nine or ten years.

“They’re starting off new, starting off at the bottom but they can make as much progress as the men’s and I fully expect that with the proper support, that they’ll be playing in the Women’s FA Cup in one or two years because that’s what women’s teams can do at this level.

“We really want to promote women’s involvement in football.

“There’s something like 200,000 women football players across the country which as a percentage compared to the United States is very small.

“And we’ve seen how successful the United States are in forming football teams. And to get women involved in their hometown is absolutely brilliant in terms of raising their profile and giving them the equal status that men have.”

The response from the local community has been met with tremendous support and the directors have given their full backing to the women’s side.

The Bromsgrove Sporting Supporters Society holds a 45 per cent stake of the club.

Mr Agüera added: “What we look to do in the next year is, obviously there’ll be fees for the league which is over £1,000 in itself, registration of the players, admin stuff, kits, sponsorship.

“We’ll do all that we can in terms of our funding and fund-raising to support the women’s team and to ensure that it’s not just successful but goes on to win trophies.”

The first class of players for the women’s team expressed their delight but said they did not feel any pressure knowing that they were the first class of female footballers to play for the club for almost ten years.

Many even said that gave them more motivation and excitement to succeed.

Aimee Taylor, Marketing Assistant, 21, said: “I personally don’t feel any pressure and I don’t think any of the other girls should.

“We’ve got such a good range of players all at a really good starting point and if anything, I find it motivation to work extra hard and show people that we can be just as good.

“I want us to be known for being the best first female team for Bromsgrove Sporting and really believe we can be.”

Her namesake and teammate Amy Kendall hopes this project inspires other young girls who have an interest in playing football to come along and jump at the opportunity to play football in Bromsgrove and be a part of this new project.

Miss Kendall, Student Teacher, 21, said: “Come along and have a go!

“We’re a friendly group, everyone is welcoming, it’s enjoyable and it’s a great way of keeping fit!”