THOUSANDS of residents across Bromsgrove joined others from around the UK at 8pm last night to ‘Clap for our carers’ to say thank you to the NHS staff and their efforts during the coronavirus crisis.

The scenes and sounds were breathtaking and emotional in equal measure, making clear the public love, support and admiration for healthworkers on the frontline going above and beyond the call of duty and putting themselves and their own wellbeing at risk on a daily basis to care for others.

The video below was posted by Bernard McEldowney of residents in Old Birmingham Road.

Officers from West Mercia Police also clapped their blue light colleagues, doctors, nurses, other healthcare professionals and all carers who are dedicating their lives for others. They tweeted the video below.

To show our support and appreciation for the amazing work the NHS, health workers and carers are doing we #clapforNHS #ClapForCarers👏👏👏 pic.twitter.com/268ZT1Ow0T

People posted on social media about the applause in their areas.

While the deputy head of Bromsgrove Prep School Mr Marie said on Twitter: “So moving to have stepped outside and joined the 8pm applause for the NHS – important for us as a whole to acknowledge the wonderful work they do, with a great number of the Bromsgrove family being frontline workers themselves.”

One house in Bromsgrove was also lit up blue to show its support for the NHS and its workers. 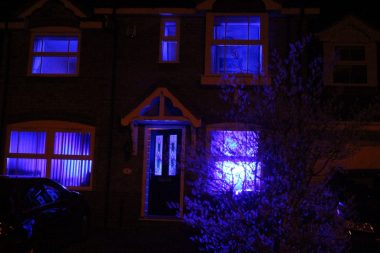 The action, as well as appreciation, also had an air of  resilience and determination for the UK to get through this pandemic.