Bromsgrove man on lockdown in Madrid completes marathon in his flat to raise almost £3,000 for the Red Cross and NHS

A BROMSGROVE man who is on lockdown in Madrid has ran a marathon in his flat, raising almost £3,000 for the NHS and Red Cross.

Jean-Marc Knoll, who is an ex-pat, originally from Aston Fields, is a keen runner but in Spain currently people are not even allowed outside to exercise.

Instead he opted to undertake his 29th marathon by running 9.65metres from his window to his washing machine 4,373 times – streaming the whole ‘race’ on Facebook Live.

Dubbed the 1st Madrid International Indoors Window to Washing Machine Marathon, it took Jean-Marc (which included stops for tapas and a couple of beers) five hours and seven minutes.

His usual marathon time is around three hours, 20. 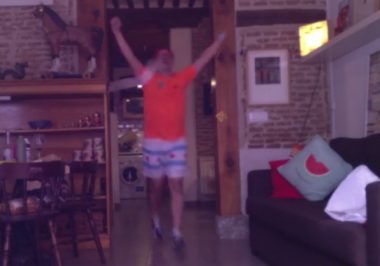 He even had a strip of toilet roll ‘tape’ across his door to run through as he ‘crossed the finish line’.

He said: “When I told my friends what I was doing, they thought I was insane.

“They said I was ‘nuts’ running in his house but I had to do it, I could not run outside so I had to run inside.”

He said when he started he did not think it would be anywhere near as difficult as any of his ‘real’ races but he was wrong.

“The first 12 miles or so were fine, but after that I got pains in my hip, knee and heel from the short turns, and felt it hard.

“At 22 miles I felt maybe just a little less tired than during a normal marathon, but not much.

“It was still the same distance.”

When asked about whether he hit ‘the wall’ some marathon runners talk about he added: “There was no wall as I had a steady stream of 60 to 70 people talking to me on a regular basis.

“I knew I would hurt, but not psychologically.”

He praised everyone who supported him during the run.

“One friend organised a delivery of jámon (dry-cured Spanish ham) to my house, and another delivered six cans of beer and four Coronas to my window while I was running.

“It was insane how my friends supported me.

“I think the people who supported me were crazier than me, they were online for five hours to push me, help me, and support me along the way.

“If you could see the texts of all the people who supported me today you would not believe it.”

He undertook his feat to help the International Red Cross’ crisis response to COVID-19 and the NHS (as well as to give him something to do for five hours of the lockdown).

Jean-Marc’s video of his run can be viewed below.