A DOG WALKER has hit out at Bromsgrove District Council, saying Sanders Park was left ‘like a battlefield’ following the bonfire night event on Saturday.

Elizabeth Cooke, who uses the park twice-a-day, said when she went there on Sunday morning the scene shocked her. 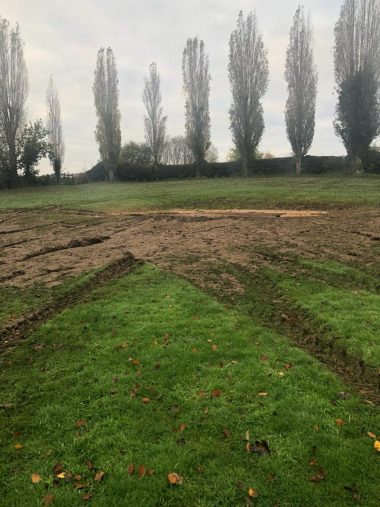 “Everybody I have spoken to about this is so angry – I’ve never known them so angry.

“It is totally unacceptable.”

She said the edges of the paths had gone, overtaken by rivers of mud.

“And the trenches carved in where the lorries and trucks have gone onto it make it look like a First World War battlefield.

“They are so wide and so much damage has been done – all this for just one night of entertainment which just a few hundred people go along to.

She said she saw more council officials in high vis jackets than had ever been there and their reaction was ‘it would just flatten out’.

“Bromsgrove District Council make some strange decisions – this will probably cost £50,000 or more to put right but then if you ask them for picnic benches which cost a lot less and would last for a long time they say they can’t afford it.” 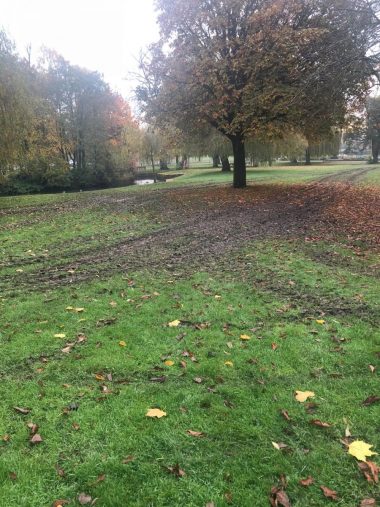 She also hit out over the fireworks.

“The noise and terror they cause to the wildlife that the council is always saying it wants to protect is unbelievable.

“They also put barriers around the pond, boxing the ducks in so they can’t get out.

“This is a popular park which is used by so many people and it has been completely ruined – just for one night.”

Heavy rain and flooding the weekend before meant the ground was already saturated and there was rain leading up to the annual event.

Bromsgrove District Council said: “It was great to see so many people turn out to see the bonfire and firework event this year, even with the overnight and morning rainfall, an estimated just over 3,000 people attending to enjoy the fantastic firework display, live entertainment and music and funfair.

“Now all the vehicles and infrastructure are being dismantled the parks team are planning and programming maintenance works to repair some of the large ruts that have been created following the essential set up and dismantling of the event infrastructure which are necessary to support the safety of the event. 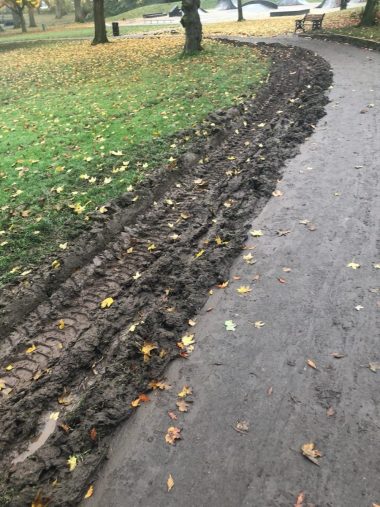 “We appreciate your patience whilst we wait for the ground conditions to settle and dry out before we can get the machinery on the grassed areas for the repairs.”

The authority added it would be working with Worcestershire County Council’s shared Pedestrian and cycle team in progressing the third and final phase of the new improved shared pathway structures through the central areas of the park which include the widening and improving the vehicle access from the Kidderminster Road, widening of the bridge and additional disabled bay.

“This work is scheduled to start next week and will conclude the final stage of this project.”

People can have their say on the annual bonfire event here.