A METAL detectorist could not believe his luck or his eyes when he unearthed a silver medieval brooch, believed to be more than 600-years-old.

Stephen Grey was out in Wychbold with the Bromsgrove-based metal detecting club, The Clodhoppers, when he discovered the rare find in a field near Webbs Garden Centre.

Fellow detectorists were stunned at the perfect condition of the brooch, which is thought to date back to the 14th century and would have been worn by a noble person to fasten capes.

Stephen, who works for the AA but ‘detects’ in his spare time, said: “The silver brooch would have been worn by a noble person to fasten capes.

“At one point in the rally there was a lot of activity in the corner of the field.

“I made my way over to where four medieval hammered coins had been found previously by other members.”

It was here Stephen got the signal on his metal detector to tell him he had found something.

“Most people wouldn’t have dug the ground but I just felt I needed to because the area had already proven productive in the past.

“That’s when I discovered this wonderful brooch, with a bit of iron rust next to it.” 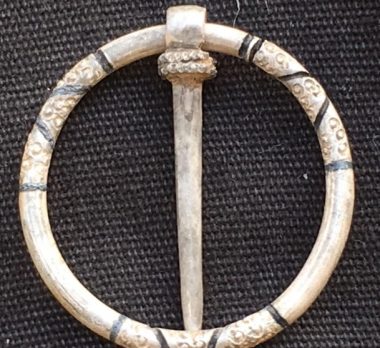 Stephen showed the brooch to the editor of the Treasure Hunting Magazine who confirmed its authenticity.

Stephen said if he was unsure of the history of one of his finds he posted a picture of it on Facebook and usually, within minutes, received messages from experts in the metal detecting community identify its origin.

“It’s all done online these days. The power of social media is huge.”

The oldest artefact Stephen found was a silver Celtic coin in Lincolnshire, said to be from around 35 BC.

Under the Treasure Act of 1996, the brooch is now classified as ‘treasure’ and has been declared to Warwickshire and Worcestershire liaison officer Angie Booth to be recorded.

It may then be kept in a museum if deemed of significant historical worth to the local community.

Live footage of the find can be seen on Stephen’s YouTube channel ‘Anglo Celtic Metal Detecting’.

Visit www.clodhoppersmdc.co.uk for more information on the local group.