ALAN Bennett’s multi-award winning masterpiece, ‘The History Boys’ proved to be an excellent choice for this year’s first venture into in-house production for the Wolverhampton Grand. 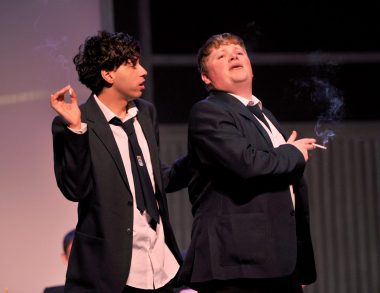 The clever script, based on Bennett’s own schooldays, is set in a fictional Sheffield grammar school in the early 1980s and concerns a group of history students studying for the Oxbridge entrance examinations. Three teachers with very different styles – Hector, Irwin and Mrs Linott – tutor them.

Ian Redford gives an absolutely outstanding performance as Douglas Hector – radiating warmth, joy and a touch of insanity to the role of the eccentric and sad schoolmaster who is unsure of his sexuality and where he actually belongs in society. His life is ruined when he is reported for fumbling with a boy travelling pinion on his motorcycle. 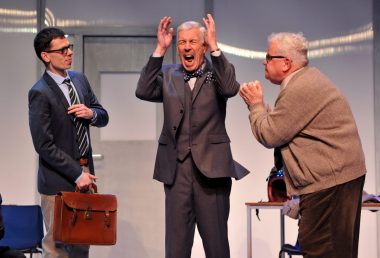 Before this incident though, through the ambitions of Felix, the hard-nosed headmaster (a spot on performance by the seasoned Jeffrey Holland) Irwin – a supply teacher with a track record of success through ruthless methods – is employed to teach alongside Hector. It turns out Irwin (Lee Comley) too is a latent homosexual, a fact that does not go unnoticed by the all-seeing history boys.

The third teacher and the only female in the cast is the foul-mouthed yet compassionate Dorothy Linott, played with an amusing balance of ‘plague on all academics and ‘we can do this’ approach by Victoria Carling, which cleverly makes the character three dimensional.

All of the boys bring different strengths to the class of students on their voyages of discovery. Jordan Scowen exudes charisma as the handsome, wise-beyond-his-years Dakin, Frazer Hadfield makes much of Scripps, the calm piano-playing collaborator and Dominic Treacy makes the perfect, overweight, ‘cheeky chappie’ Timms.

Thomas Grant is outstanding as the young, gay Jewish Posner who worships Dakin, Joe Wiltshire Smith turns in a sometimes scene stealing performance as the athletic, non-academic Rudge, James Schofield does well as the opinionated Lockwood, Arun Bassi makes a poignant job of Akthar the Muslim and Adonis Jenieco completes the class as wannabe actor Crowther. 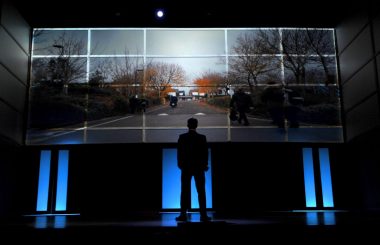 Jack Ryder directs with a passion for the play and his superb knowledge of pace and timing is obvious, moving the action as he does through monologues, back stories and time zones, teasing and pleasing, dutifully following the complexity of Bennett’s storyline whilst making us care about every single participant.

The set by designer John Brooking comprising a cycloramic movie screen above the stage and a flowing series of space creating walls beneath it, make for a continuous journey.

Jack Ryder also directed the film made using the cast plus pupils of Thorns Collegiate Academy in Brierley Hill, which appears on the screen and underpins and expands the action seamlessly.

This ‘History Boys’ is a magnificent achievement for the in-house company and I hope the Wolverhampton Grand gets the full houses it deserves.

The History Boys runs at the grand until February 22.