A WISE sage of the theatre once said to me that a director should always be cognisant that the most important person in the rehearsal room was the playwright – even if they have been dead for a thousand years. I was a young buck cutting my teeth back then – more years ago than I choose to remember – but those words are personally biblical.

Director Michael Barry must also have had this etched onto his theatrical psyche as his ‘This Happy Breed’ is definitely just how the master, Noël Coward, intended. It is meticulous in detail, iconic in visuals and spot on in delivery. 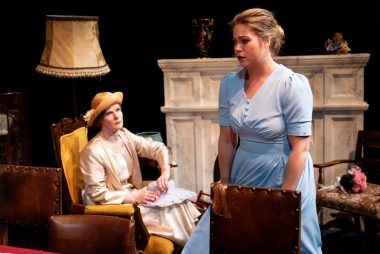 Coward is of course better known for frolics and capers set twixt cocktails and canapés  amongst the gay (as in fun-seeking) young and privileged at a time when class barriers had borders. This Happy Breed’ is unique among his catalogue as Coward puts his magnifying glass over the backbone middle-tier of British society. It is set in the period of personal and political questioning and change between the end of the Great War and the start of the Second.

The play opens with the unpacking of tea chests in the newly rented home of the Gibbons family in Clapham Common, London. It closes with the packing up of the same tea chests as Frank and Ethel, with whom we have shared 20 years of their lives over two theatrical hours, prepare to move to a small flat and a final, precious twilight adventure. 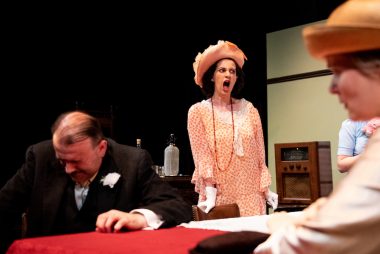 Along the way we have met their family, watched their dreams mature, change and sometimes disappear, we have shared their joy and felt their grief. There’s nothing unique about the Gibbons and their story really – struck a few personal chords with me and I’m sure many others and it does what it says on the label and personifies This Happy Breed’.

Colin Simmonds is very comfortable in Frank’s shoes – I cannot imagine anyone else in the role – he is believable and evidently believes in himself. It is a performance that is as infectious as his smile and I’d dearly love to share that treasured bottle of whisky with him. 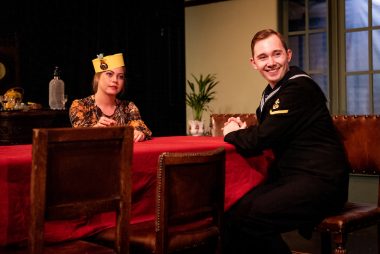 Equally joyous is Jenny Thurston as Frank’s wife Ethel, a matriarchal mum to be respected – kind of heart and nature, but rouse her wrath at your peril.

Back in that era, unmarried sisters often lived with their sister and their husband, as did grannies who sat in comfy chairs by the fire and knitted. Amy Findlay brings a smile as Frank’s sister Sylvia and Skye Witney makes for a delightfully waspish Mrs Flint their goading mother (the late, great Les Dawson would have had a field day with her).

Simon King as nextdoor neighbour and Frank’s ex-comrade in arms Bob Mitchell, provides many a poignant and drunken moment in a well-sculpted characterisation, Wanda Raven is quite perfect as the ‘woman who does’ Edie, from her walk to her accent she seizes many a moment. 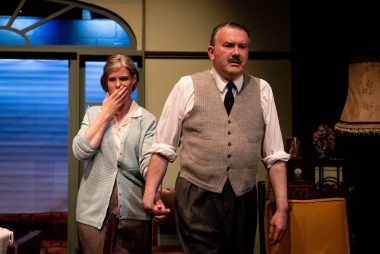 The Gibbons children Reg, Queenie and Vi played by Griff Llewlyn-Cook, Emilia Harrild and Annie Swift are all strong performances, capturing the family bonding at times and markedly individual at others.

Hannah Lyons appears briefly but makes the most of her lovesick  totty role as Reg’s sweetheart-hubby to be Phyllis, Sam Wilson nicely flies the red flag as Vi’s beau-cum-husband Sam Leadbitter the wee-bit-Bolshevist wannabe and bringing in a masterly performance as Billy is the ever-watchable Jack Hobbis.

A special shout out to Stewart Snape who has frocked to perfection and the property team who certainly had their work cut out with the countless period crockery, cutlery and tableware.

Mr Barry I am so glad you didn’t make this a ‘Funky Gibbon’ – your vision was as perfect as Mr Coward’s wit  – a night of theatre to cherish and a truly memorable end to an excellent Crescent season.

The show by The Crescent Theatre Players runs until Saturday, July 13.

Nicky Campbell: How my dog helped me through my breakdown