The Nystagmus Network, a registered charity in England and Wales, is delighted to announce that it has been granted a Radio 4 charity appeal.

The appeal will be presented by well known TV presenter, broadcaster and author, Richard Osman. Hear Richard talk about the charity here.

Nystagmus is a serious form of visual impairment, characterised by uncontrollable eye movements. This affects the ability to focus, recognise faces and see the world in three dimensions. People with nystagmus need support at school, in employment and, often, with generally getting around. There is no cure, currently. 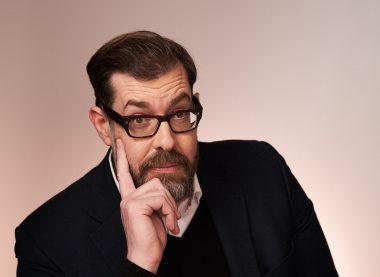 Richard has nystagmus himself and says it is his “absolute pleasure” to be able to support the charity in this way.

Although he enjoys a successful career, he explains that at school “I had to listen an awful lot.” He famously cannot use an auto-cue when presenting on TV and must commit everything to memory.

The charity is particularly thrilled to have Richard’s support with the appeal as he is something of a role model to children and young people who have nystagmus. They see him on TV and know that they too can achieve their ambitions if they work hard and get the support they need. Richard’s success and high profile are also a source of great comfort to the many parents who worry what the future may hold for their visually impaired children.

The charity provides support and information, raises awareness of the condition and promotes and funds research into potential treatments.

The charity’s Information and Development Manager, Sue Ricketts says: “We are so pleased to have been awarded this opportunity to have a Radio 4 appeal. Many listeners will hear about nystagmus for the very first time from someone who lives with the condition himself. What better way to raise awareness?”

Every pound donated to the appeal will help the Nystagmus Network continue to support the children, adults and families living with nystagmus and provide them with the information they need to thrive.

For more details please check out the charity’s website and social media channels.