IF YOU are looking for something to get you out of your comfort zone this half-term, head to The Bear Grylls Adventure Centre in Birmingham.

It is the first in the world to be inspired by the famous former SAS serviceman, survival expert and instructor.

After being offered the chance to try it out I was apprehensive – heights and the like are not my strong point. 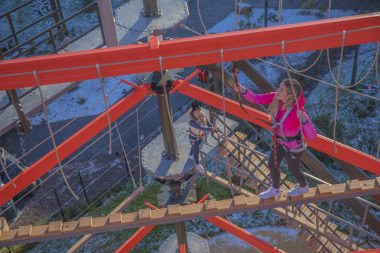 But with a 12-year-old daughter who has been nagging to go ever since it opened I thought I would give it a go.

Each challenge begins with an inspirational video from Bear giving you hints and tips of what to do as you undertake the tasks.

The staff are amazing – as well as the warm welcome you would expect at an attraction like this, they are also very supportive and knowledgeable – helping you prepare for what lies ahead and even joining in.

First we took on Fear Zone – a pitch black maze to negotiate with an added challenge which seemed fresh out of I’m a Celebrity Get Me Out Of Here. 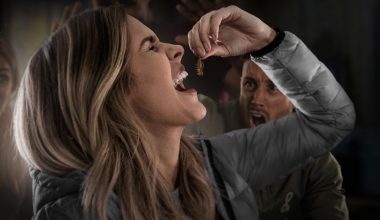 As you get into your group you immediately feel a sense of solidarity with the others as you work your way round, starting on your feet, then crawling and going feet-first down a small sloping tunnel.

There are creatures (thankfully in glass cases) to check out and then an eating challenge where you half expect Ant and Dec to pop up and tell you how many stars you can win for camp.

Next up was Europe’s highest outdoor free roam high ropes which features four levels of varying heights – progressing up to 20metres high.

This was when I really was putting on a brave face for my daughter.

To add a bit more ‘danger’ to this challenge, we had picked what felt like the windiest day of the year so far.

So much so they shut the top level – part of me was relieved.

Again it started with an inspirational and informative video from Bear – which included the advice ‘Don’t look down!’ Thanks for that.

Safety is paramount at the centre and there were two members of staff meticulously double and triple-checking our harnesses and ropes (just the reassurance I needed with my fear of heights) before we made our way to the start.

This was pretty exhilarating – you speed on a zip wire from the replica of the back of a Chinook helicopter onto a platform. I coped with that no problem. It was the next bit I wasn’t looking forward to.

Two more members of staff checked our harnesses and ropes and then we made our ascent.

I tentatively stepped onto one of the safer looking routes and, after making it successfully across, I was in the zone!

In total there are 36 challenges (aerial paths) to take on. But with the top level shut because of the conditions we settled for the 28.

They range from thin beams and ropes to stepping stones. There is even one where you have to walk out on a ledge – again like that challenge in the opening episode of I’m a Celebrity (and it felt just as breezy).

After the first I made my way through them one by one and completed 26 out of the 28 on offer. I was very happy with that.

My daughter did all 28 but there were a couple I did not like the look of – one was a beam which swung forward and back and the other was a precarious looking rope one.

On some of them, whilst the view of the top of the NEC (and we all know how big that is) was pretty good, the high winds lifted the fear factors.

Even my daughter said she was scared on a couple of them and she loves this kind of thing.

We made our descent and – after an hour on the high ropes – I was tired (having used muscles I didn’t know I had) but buzzing.

We made our way to the ‘Royal Marine’ style assault course.

Now I consider myself to be relatively fit – I swim, run and cycle, but I am clearly no commando. 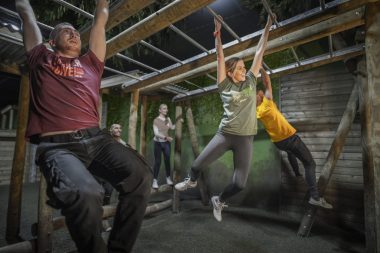 The course involved stepping stone logs, jumping over logs then rolling under others, crawling under nets, running up a steep slope, jumping onto the next level, going under more nets, scaling 6ft walls.

The two I found the hardest came at the end – shimmying across a circular beam which always looks easy when you see it on TV fitness shows and the monkey bars – they have always been my nemesis and seem to get harder with age.

We were both gasping for breath and water afterwards, but smiling. My daughter beat me on both our runs (you can take on the assault course as many times as you want but two was enough after our packed day).

In between the activities there are plenty of other things to do. The design of the centre is fantastic – there are plenty of picture opportunities, including one with a mannequin of Bear himself scaling rocks, inspirational quotes on the walls and distance signs to far-flung places, such as Brownsea Island and the South Pole.

We had a fantastic daddy-daughter day here and what was more incredible was, despite being there for almost four hours, we had only scratched the surface.

Other activities include iFly (indoor skydiving) and a climbing wall boasting 20 routes (which I’ll be giving a miss), shooting, archery and escape room (I’d happily take on them) and two I would love to return to do – Snorkel and ‘Dive’.

We saw a group taking on the dive and it looked amazing – there is a Sea Life Centre style tank full of 800 ocean creatures, including rays and sharks.

And if you are a bit fearful of some of the other challenges you are due to do, you can always just sit there and watch the fish for five minutes – after all, they put them in dentists’ waiting rooms. 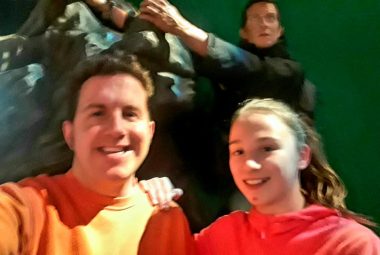 As we made our way out – exhausted but exhilarated – we were both chatting away about the achievements we had accomplished.

I was also content with my only victory of the day – my speciality event of running for the train which I won by quite a few lengths!

Click here to see what family fun you can have over February half-term at the world’s first Bear Grylls Adventure Centre.

Open air museum among first in UK to open doors