AS SOMEONE who has spent my life in theatre I don’t know how I have avoided seeing this gender-bending, ear-splitting, blood-pumping show before.

I watched in awe and amusement from the window in the Alexandra Theatre bar overlooking Birmingham’s Suffolk Queensway as the audience arrived dressed in a glorious abundance of Basques, stockings, suspenders, operating gowns, space suits, sparkly hats and many more representations of what the cast would be wearing onstage.

They had come to worship at the Holy Grail knowing the Order of Service inside out, as Richard O’Brien’s legendary rock‘n’roll musical ‘The Rocky Horror Show’ kicked off its latest 12-month tour. 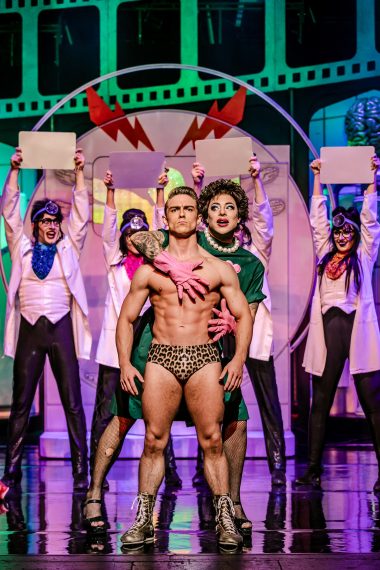 Since its debut back in 1975 it has attracted an ever-growing evangelistic following around the world – and now I understand why.

Lights up and the fabulous band under the musical direction of George Carter kick off to a roar from the audience to rival a football stadium crowd.

She sings as sexily as she looks – then deftly pulls back the exotic tab to reveal the new circular set incarnation by designer Hugh Durrant.

This is the first of many movie style transitions to showcase seamlessly the mayhem, mirth and madness.

Brad and Janet – beautifully crafted goody-goody performances from Ben Adams and Joanne Clifton are driving in their car with a tyre that is about to go bang and leave them broken down outside a gothic mansion. 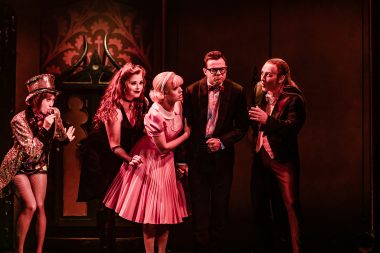 Enter Narrator for the Birmingham leg of this tour (cleverly there is to be a regionally appropriate narrator for each venue) Alison Hammond.

She is everything a good host should be – warm, cuddly and nicely naughty – an instant virtual handshake to being your new best mate

For every line Brad and Janet say, RHS aficionados in the audience shout out a quip, a question or say it before or with them. The adult panto party has begun in earnest.

Brad and Janet seek help at the house – all they want is to make a phone call and what they get is seduction and sex education with knobs on. That’s all the plot you need to know, if you don’t already know it, and I suspect most of you reading this already do!

Laura Harrison doubles as the usherette and the magnificent vampiric beauty Magenta, Miracle Chance plays strange alien beauty hanger on Columbia with a high pitched yet endearing squeak and squawk.

Callum Evans catapults, somersaults and generally does things with his body that shouldn’t be possible and still manages to sing and act superbly too.

And so to Duncan James as the gothic rock god – Frank N Furter. He excites, captivates and leads majestically, from the raunchy ‘Sweet Transvestite’ through to the poignancy of ‘I’m Going Home’. He deserves a crown with five stars.

The congregation – sorry, audience – participate profusely yet are respectful when required. Cast and musicians (stunning sax playing by Nathan Hawken) are fused and melded. We danced, we partied and worshipped at the shrine of Richard O’Brien. 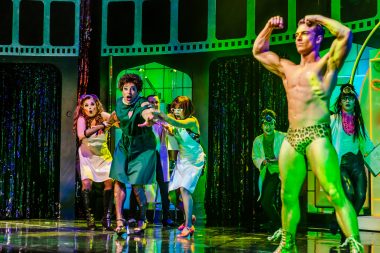 Would I do the timewarp again?  Hell yes! Sell your soul to get a ticket.

The Rocky Horror Show runs at the Alexandra Theatre in Birmingham until May 25. Visit https://www.atgtickets.com/shows/the-rocky-horror-show/the-alexandra-theatre-birmingham/ for tickets, times and prices.