‘NATIVITY’ has been around as a movie for many few years now (I think we are at ‘Nativity 4’ in the film franchise) but as a musical for just two, I had the pleasure of reviewing the world premiere at the Birmingham REP and loved it.

Now this barnstorming blockbuster of a feelgood show has grown to even more dazzling heights.

For anyone that isn’t familiar with the story, it’s set in nearby Coventry where three friends grow up and dream of becoming stars. They all went to drama school together to further that dream.

Then two became – teachers! Aka Mr Maddens – delightfully broody performance from Scott Garnham and the chip the size of a house on his shoulder Mr Shakespeare –captured masterfully by Charles Brunton.

The third chum Jennifer Lore – a doey- eyed Ashleigh Gray – goes off on an internship to Hollywood where everyone back home believes she is a big shot movie director whilst in fact she’s a secretary!

Mr Madden teaches at local catholic primary school, ‘St. Bernadette’s’ which has lost its pride and is in dreaded ‘special measures;’

It is however going to polish up its tarnished tinsel by staging a Nativity play for the first time in five years.

The last time they attempted one it was given minus two stars by dreaded local critic Patrick Burns – a delightfully dastardly performance from Jamie Chapman.

The St Bernadette’s Nativity comeback happens because the enthusiasm of new teaching assistant Mr Poppy – a simply huge and totally engaging performance by Scott Paige – who reignites the sparks of pride in the students, Mr Maddens and beleaguered headteacher Mrs Bevan – a faithfully full-on performance by Penelope Woodman which many a head will no doubt identify with.

Along the way to the Bernadette’s Bethlehem, a white lie that ‘Hollywood’ is coming to Coventry to see their nativity sets off a chain of events of which dreams are made. Hollywood does indeed arrive – by helicopter and in the form of Hollywood icon Polly Parker – Love Island’s Dani Dyer.

The ‘Nativity,’ staged spectacularly in Coventry Cathedral is almost a separate show in itself, where the talented kids shine awesomely.

The effects are dazzling, the music and dancing feverish and the atmosphere magical.

One special moment when a spiteful Shakespeare pulls the plug on the lights and the audience is asked to light the stage via the lights of their mobiles is inspired. The three tiers of the Grand Theatre looked like a twinkling starry night. 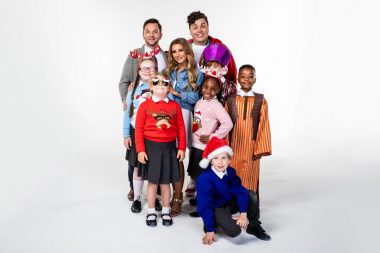 Huge congratulations to writer, director and composer Debbie Isitt for bringing back this gem bigger and better to the stage for new audiences to enjoy.

Congratulations also to Andrew Wright the choreographer, Dan Glover the musical director and David Woodhead the set and costume designer – plus of course to the Grand Theatre for staging so well this first leg of this national tour.

It is sumptuous and joyous early Christmas outing which kick-starts the season beautifully.

Nativity is at the Wolverhampton Grand until Saturday.