Crescent's Streetcar is Swift and Stella but needs more power

‘A STREETCAR Named Desire’ was first produced in 1947 and so physically and literally intense is this Tennessee Williams classic that it should still pack a powerful punch today.

Blanche Dubois (Annie Swift) a schoolteacher from small town Laurel, Mississippi, arrives via the said streetcar to the sparse New Orleans home of her sister, Stella Kowalski (Beth Gilbert) intent on staying for an indeterminable amount of time despite the sisters having lost touch. 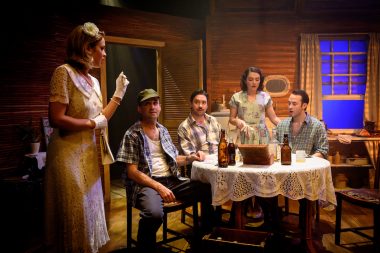 Blanche tells Stella she has lost the ancestral home ‘Belle Reve’ following the deaths of all their remaining family. She also tells her she is on an extended leave of absence from her teaching position due to her bad nerves.

The genius of Williams’ words is that he gives us a host of clues – ‘Belle Reve’ translates to ‘beautiful dream’. This is the first indication that all is not what is seems with prim and proper Blanche – with her attraction to the bourbon bottle being a close second.

Swift makes a good job of capturing many of the multitude of layers that go to make up the complexity of Blanche and is at her best in act two when the blurred lines between reality and the world she creates to protect herself, finally flip. It is, in fairness, one of the most dangerous roles in theatre and she follows many a famous footstep well. 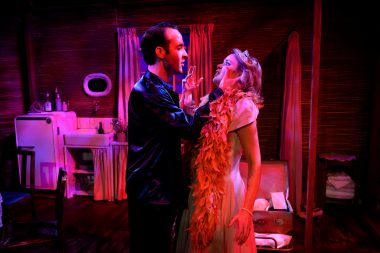 Gilbert has an easier role as the far less complex Stella, but she perfectly captures every available nuance of the character. She is utterly believable as a woman who has happily turned her back on privilege and swapped it for a role of sexually-fuelled subservience.

Stella is dominated by her Polish husband Stanley (Ollie Jones) – a man of little subtlety who can sees no relationships between men and women other than mutual physical pleasure – for all intents and purposes his brain seems located in his groin.

Jones offers a one-dimensional approach to portraying Stanley, who in fairness is a character that has little to offer in the terms of a light and shade.

Joe Palmer scores well as Stanley’s buddy Harold (Mitch) Mitchell who falls for Blanche’s advances as she sees him as easy prey. 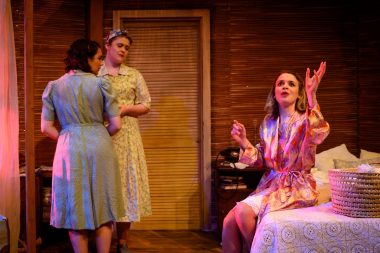 The cast accents are all perfectly drilled and executed so a shout-out for a good job to dialect coach Jaz Davidson and to the talented Phil Parsons for building a set from the Keith Harris design team that works perfectly in the studio space.

Director James David Knapp has knitted together the strengths of his talented cast and has created a smooth flowing production, which succeeds in telling the story.

There is no doubt Knapp knows how to paint the canvas, but to me he punches with soft body blows rather than the powerful Tennessee Williams haymakers that are on offer.

The darker moments should be darker, the physical theatre more intense and prolonged and Blanche’s descent into insanity, bleaker.

It’s always difficult to tackle a classic and this production achieves much of the journey.

Streetcar runs at The Crescent’s studio until Saturday.