Collaboration aplenty at the Crescent in Brum

COLLABORATION at the Crescent Theatre lives up to its title in more ways than one.

The story sprawls between 1931 and 1948 covering the rise and fall of Nazism, exploring the impact this had on friendships, loyalties and beliefs; how all things artistic were driven underground whilst their public face was that of condescending puppetry. 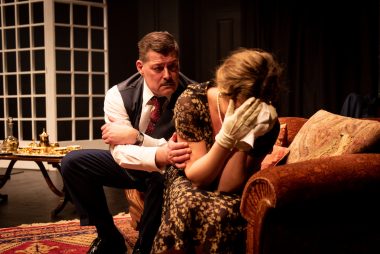 Bill Barry as Richard Strauss grows in confidence from a slightly unsteady opening scene to pull it all back and give us a veritable tour-de-force. By the final moments we felt we had been through his emotional mangle with him, understanding totally that for a man of so many words why he is rendered speechless and empty.

Simon King as the trendy Austrian Jewish writer Stefan Zweig reminded me of a well-padded Freddy Mercury with his clipped hair and moustache. He was believable to the point that we could almost see what was going on inside his head as he evaluated his options. 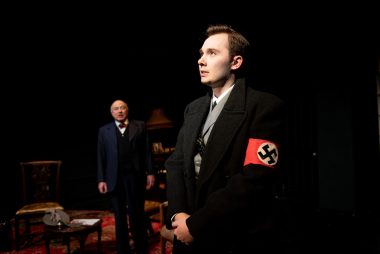 Skye Witney as Strauss’s formidable wife Pauline struck just the right balance between being unstintingly loyal to her husband and intimidating to all in her path.

Lotte Altman the Zweig household maid who becomes Stefan’s lover is a huge performance from Emilia Harrild. The closeness of a studio production allowed her to act with her eyes, a rare feat achieved by an actor; all too often they are soulless. Here we saw Lotte’s fear and shared the intensity of her love for Stefan – for me she crossed the line from performing to believing. 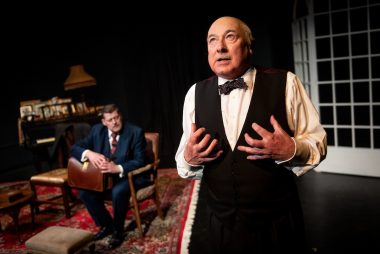 Alan K. Marshall’s production is not without faults, there is some awkward staging, perhaps inevitable on a wall-to-wall set that flits the action from side to side and Act One has unnecessary movement. However these are forgivable criticisms as for the most part they are born out of embracing directorial challenges rather than simply going for a get-out-of-jail-free, no-set, ‘theatre in the round approach’. Marshall has a vision he is keen to share and I for one applaud that.

I’d like to give a ‘Hats Off’ salute to the props team for the attention to detail of actual steam coming from the teapot and the magnificent gold cups in the Zweig household.

With anti-Semitism currently rearing its ugly head in society ‘Collaboration’ serves as a timely reminder that we need to stamp on this lest it becomes cancerous once again.

Catch this excellent production if you can, as I’ve said before “When the Crescent is good……”

It runs at the Crescent Studio until Sunday, April 6.