WITH a set costing in excess of £1million, pantomimes do not come more ‘big budget’ and extravagant than this – you can see why it is running until February 2. 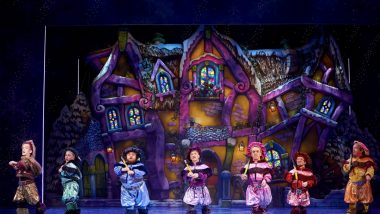 It has all the flashes, bangs, fireballs and pyrotechnics you could ever want, along with a two-tonne dragon which takes 11 people to manoeuvre and comes almost right into the audience, a massive mirror screen and an impressive reindeer sleigh that rises and hovers in the air.

But you cannot just throw cash at a production and expect it to ‘wow’ the audience, you need a quality cast as well – and the Birmingham Hippodrome’s annual offering had top class performers in abundance.

This is the festive show that has everything and a must-see production. 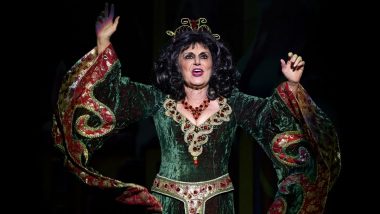 Lesley Joseph is a great evil Queen Dragonella – you could see how much she loves this genre and relishes taking to arguably the biggest panto stage in the UK.

The Dwarfs were so well-rehearsed and so well in-tune they could have finished each others’ sentences (and often did).

Joe McElderry was a super Spirit of the Mirror and with a former X-Factor winner you know you are in safe hands when it comes to the musical numbers. 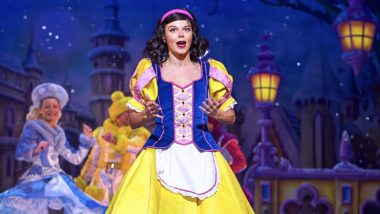 Faye Brookes performed well as Snow White, showing both her acting talent and vocal range musically and Jac Yarrow was great as Prince Harry of Harborne – one of a multitude of Birmingham references in the show.

While we are on that subject, Doreen Tipton earned plenty of laughs as the Lady in Waiting, talking about the Black Country and ‘simply being Doreen’.

Top dance troupe Flawless – who made the Britain’s Got Talent final – provided the moves as the Queen’s guard and Andrew Ryan was the suitably promiscuous dame Nanny Annie Asprin, dipping in with double entendres and innuendo whenever they could be squeezed into this already packed production. 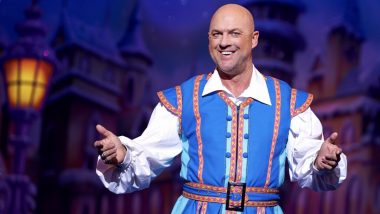 More often than not it is the dame who steals the show in pantomimes but in this one it was Matt Slack as Muddles.

I had not seen much of Matt’s work before but in almost two decades of pantomime reviewing I don’t think I’ve seen anyone put in such an impeccably-timed comedic performance.

It began in the first half with his impressions of comedians – from Billy Connolly, Brian Conley, Harry Hill and Alan Carr to John Bishop, Michael McIntyre, Paul O’Grady and Micky Flanagan, he could do them all – and in quick succession as well.

In a ‘Who Wants to be a Millionaire’ scene the one liners were far from ‘Slack’, coming one after the other in a way that you had to cut short your laughing so you could hear the next one.

And he was at it again in a quick-fire exchange with Lesley Joseph.

In fact the pair had a fantastic rapport throughout the whole show.

From the moment he walked on it was clear Matt Slack loves Birmingham and the Second City loves Matt Slack – he calls it ‘his second home’ and you can see why. 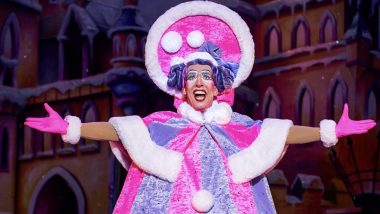 My pick of the scenes was the rendition of ’12 Days of Christmas’ which was frantic in the extreme with five of the cast running up and down to say a line of the much-loved seasonal song while other characters hopped on and off stage, mischievously switching the items.

On one occasion the ‘five toilet rolls’ made their way into the audience. Lesley Joseph who had the items ‘slip from her grasp’ looked positively shocked and remorseful – I’m not sure whether it was deliberate and she was using her wealth of acting talent or whether it was a genuine butter-fingers moment (you never know with panto) but who cares? Either way the audience were in absolute hysterics. 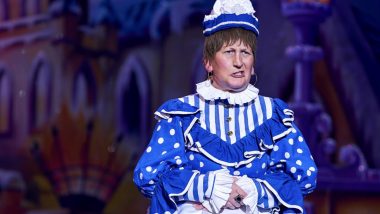 I don’t think I have ever heard so much laughter from a panto crowd (and this was a massive audience) and I also do not think pantomimes get more fun than this – both for the youngsters who cheer and boo at the characters playing out the plot or the naughty adults laughing at the lines which go above the children’s heads (we have always seen them looking puzzled and asking rather awkward questions).

There is also a nice twist in the apple scene which I won’t write too much about so as not to spoil the surprise.

Snow White at the Birmingham Hippodrome is what panto is all about and, with it running into February, there’s no excuse not to go and see it.

8 things all new students need to know about university life

The Wonder of Stevie: How a child prodigy became one of the world’s greatest ever musicians

Who Wants To Be A Millionaire? – Is tonight the night we see the sixth millionaire winner?