DESPITE it being around for many years, this is the first time I have seen the stage musical of ‘The Bodyguard’.

The fact this new version reunites Alexandra Burke with the role that launched her stage career back in 2014 was another reason for catching this tour whilst her amazing voice is in it.

I was not disappointed – quite the opposite – this is one wild ride of a show with a bit of everything woven into it like a theatrical tapestry.

The score offers up some terrific numbers including such classics as ‘Greatest Love Of All’, I’m Every Woman’, ‘I Wanna Dance With Somebody’ and of course the legend that is ‘I Will Always Love You’.

The book is a very clever adaptation by Alexander Dinelaris of Lawrence Kasdan’s original screenplay for the 1992 movie – starring the late great Whitney Houston and Kevin Costner. 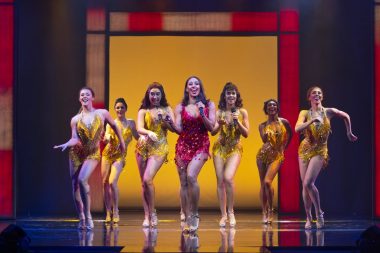 Kasdan also wrote screenplays for ‘The Empire Strikes Back’ and ‘Raiders Of The Lost Ark’ and is known for writing challenging special effects moments. Dinelaris has carried this into the stage show with a multitude of effects from the first moment when a gunshot reverberates around the auditorium demanding attention.

The set moves in and out and up and down, with fire, smoke and lighting effects to grace the biggest rock concert arena. There are film effects on a giant gauze and settings that move from Beverly Hills mansions to the Oscars by way recording studios, log cabins, karaoke bars and more; all effected smoothly and in the blink of an eye.

This show demands a huge technical crew and a masterful stage manager.

Take a bow, Jamie Capewell! On press night when there was a fire cannon left burning on stage after the opening number, our hero didn’t clear the auditorium and send us out to wait in the cold, but made the right call. He stopped the scene, sent on crew member with a hand held extinguisher, sorted the problem and restarted the scene from the beginning to rapturous applause. Capewell by name and cope well by nature.

Back to the review and the magnificent presence that is Alexandra Burke as superstar Rachel Marron. She simply oozes charisma, makes you dizzy with those high notes and thanks to that ‘Strictly’ training, now taps her toes and kicks her legs with the best in the business.

Burke is well supported by Ben Lewis as the bodyguard himself, Frank Farmer. Lewis looks and moves like someone you’d really want in your corner if the chips were down. He is convincing and draws you in to what he is thinking.

Craig Berry makes a splendid job of Rachel Marron’s security man, Tony Scibelli, Emmy Willow adds much as the Diva’s PA and sister Nicki Marron (complete with awesome vocals) and young Riotafari Gardner was totally captivating in his turn out of the six youngsters playing the part of Rachel’s son Fletcher. 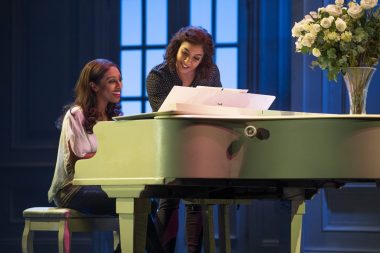 Phil Atkinson is magnificently deadly as the stalker, giving us many a moment of chills down the spine.

The production is directed by Tracy Lane who has joined up all the artistic dots admirably and the superbly tight orchestra is under the baton of its keyboard playing MD, Michael Riley.

This is a big, bold, brash show that makes no apologies for being totally in your face from the get-go. It also has the bonus of a walkdown that is a mini-show in itself.

I loved it! Tickets are like gold dust apparently – my suggestion is to go prospecting for them.

The Bodyguard is at the Alexandra Theatre until next Saturday, February 1.