A CLEVERLY compiled Remembrance Sunday night concert at Artrix took the near-capacity audience on a journey up to, during and after the D-Day Landings.

The event raised funds for the Royal British Legion, whilst providing the town with a way of commemorating the 75th anniversary of the largest ever seaborne invasion in history. 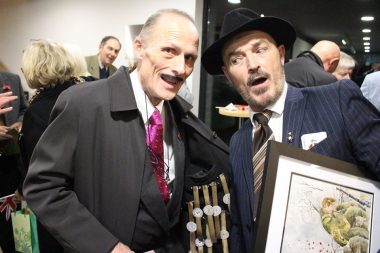 The mood was set as you entered Artrix with a piper playing and a couple of ‘spivs’ mingling with the crowd offering black market goods.

In the first half – following the introduction and a speech by Winston Churchill, played by John Burman, talented local performers took to the stage including Vintage Class. The foursome paid their own tribute ‘1940s style’ to the British Army, Royal Navy and Royal Air Force.

Cadets from each arm of the forces were stood to attention behind the singers. 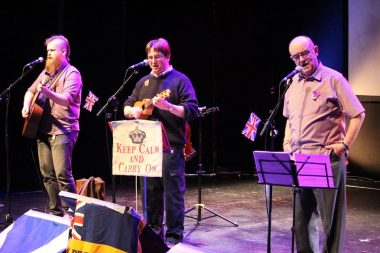 Bromsgrove’s folk band Fairfield also paid their own tribute with a mix of cheery songs – including Thing-Ummy Bob and It Serves You Right, You Shouldn’t Have Joined by George Formby – and the sombre – Margarita.

In between them was arguably the highlight of the evening – a 20-minute interview with Betty Webb who served at the UK’s code-breaking base of Bletchley Park. The efforts of Betty and her colleagues changed the course of the war and made the D-Day Landings possible. 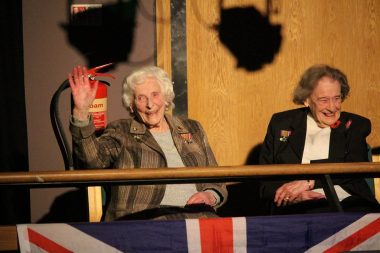 The insightful interview by Jo Slade and Betty’s first-hand account of her daily life back then (and her very modest approach to her achievements) made the transformation back to 1944 very real.

It was led by RBL branch chairman Patrick Smith with Rev Ray Khan, the Bromsgrove Royal British Legion’s chaplain and was perfectly punctuated with a poignant poppy drop during the two-minute silence. 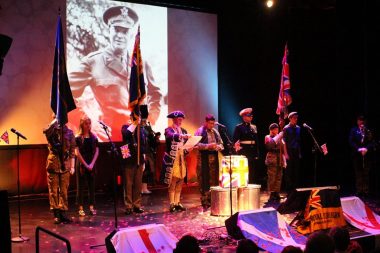 The address by Eisenhower – given by Bromsgrove Town Crier Kevin Ward – set the scene for the ‘D-Day Landings’ task which lay ahead and the song ‘Wish Me Luck’ by Vintage Class, Catherine Tabberner and Ward took us nicely into the interval.

The second half began, focusing on the ‘home front’ and the hopes of the many that their loved ones would return – Vintage Class performed ‘When they Sound the Last All Clear’ and ‘Keep the Home Fires Burning’. 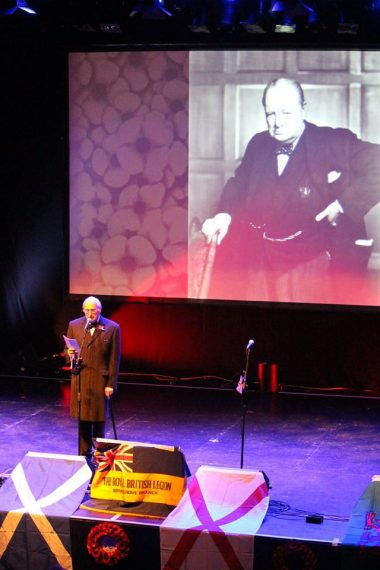 A BBC newsreel announcement about the D-Day invasion was played on the big screen before Burman returned with Churchill’s speech to his House of Commons colleagues about the D-Day assault.

The action then moved to the way people back in Blighty were occupying their time, including a ‘Dance Hall’ scene featuring All About Swing dancers and music by Vintage Class.

A patriotic musical medley of Rule Britannia, Land of Hope and Glory and Jerusalem was performed by Catherine Tabberner and Kevin Ward, leading to plenty of singing along and flag waving.

And, after King George VI’s address to the nation following D-Day, the stirring There’ll Always Be an England, The White Cliffs of Dover and the National Anthem were performed.

We’ll Meet Again brought the curtain down, not only on the concert but also on Bromsgrove’s Remembrance Sunday commemorations.

We cannot begin to imagine what our fellow Brits went through from 1939 to 1944 and the roller-coaster of hopes and fears brought by the Second World War and D-Day.

But this concert, put together by Jules Evans and Leigh Blakeman, enabled us to learn more about that time and remember those who made the ultimate sacrifice.

Open air museum among first in UK to open doors