JM BARRIE’S original tale of ‘The Boy Who Wouldn’t Grow Up’ is just about recognisable in this delightfully brash panto version by Alan McHugh at the Birmingham Hippodrome.

It is indeed ‘an awfully big adventure’ with household name stars dazzling on stage as well as those twinkling on the sky curtains.

There are spectacular sets, a kaleidoscope of colourful costumes, pacey dance routines, songs a plenty, tight cool band and a barrel load of special effects to bring a bevy of gasps.

Pantomime audiences come not only to be entertained, but also to play their part in this uniquely British theatrical experience by booing, cheering, hissing and whooping appropriately. They did this on cue from the dynamic Matt Slack as Mr Smee – the whirlwind around which everything revolves. This is Matt’s sixth successive year in the Hippodrome panto and the cheers that greet his entrance are rightly gladiatorial.

He offers up a perfect mix of pathos and crudity, he generates warmth; has a great singing voice and most of all gives us a charismatic, inclusive and generous performance – he acts to one and includes us all – a rare talent indeed.

We first meet Mr Smee on the rooftop of the Darlings’ family home in Brum (The setting for this production is moved from the rooftops of London to the Second City and why not indeed?) 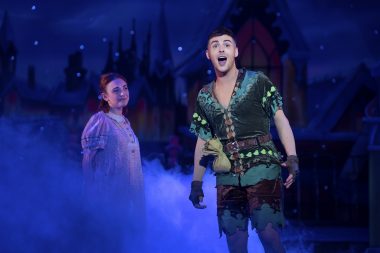 Smee is some sort of family retainer/nanny to Wendy, John and Michael and when they fly off to Neverland with Peter Pan (an engaging pop star performance from Jaymi Hensley) and his fairy chum, Tinkerbell (a gorgeously stroppy outing from Kelly Gnauck) he follows them through the clouds on a Vespa scooter.

The aerial trip is stunning enough as our historic troupe fly high up in the skies past stars and round planets, but to see Smee’s scooter twist and turn above our heads is a breathtaking aerial stunt reminiscent of those masters of Las Vegas illusions ‘Siegfried and Roy’.

On arrival at Neverland we meet the legend that is Captain Hook played by the legend that is Jimmy Osmond. He is perhaps more endearing than dastardly but we boo him just the same. He is at his best when indulging in clever word play. There is a quite wonderful rhyming word sessions involving him, Smee and the Magical Mermaid.’ Meera Syal brings magical, good fairy queen warmth to this role for which she is quite-rightly rewarded by getting to arrive in spectacular style via a flying seashell.

As well as the scripted gags these three principals revel in ad-libbing when things go wrong, like wigs and moustaches falling off. They are enjoying what is happening and that enjoyment is infectious.

Of course no panto would be complete without a slapstick scene – here Hook, Smee and the Mermaid are joined by Pan to give us a hilarious musical comedy routine involving frying pans, truncheons and buckets of water. Smee of course bares the brunt of most of the knocks, bumps and prods but he gets to wield the water over the audience as consolation.

There are some entertaining dance routines – my personal favourite comprised a row of dancing crocodiles. Joyous as this is, for a second you are left feeling ‘Is that it for Hooks nemesis?’ Oh no it isn’t! They are but the warm-up to a crocodile who is to crocodiles what Jaws is to sharks – he is massive and stretches from his twitching, armour-plated tail at the back of one of deepest stages in the world, to hover with mouth akimbo displaying rows of sharp teeth over the first few rows of the stalls causing the occupants to duck in terror. 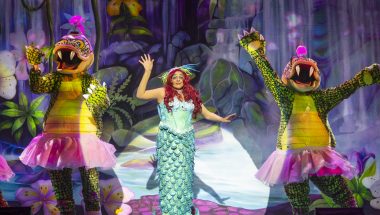 Imogen Brooke as Tiger Lily makes a delicious if brief appearance as the Red Indian Princess – I would love to have seen her do more as what she does is quite memorable.

The speciality acts of ‘The Drunken Pirates’ and ‘The Timbuktu Tumblers’ compliment the action with fitting displays of gravity defying balancing and acrobatics.

Perhaps more could have been made of Nana the dog who just gets to wander on and off a couple of times without really anything to the story or the action – but this is a minor niggle amongst a box of delights.

From the principals through the ensemble to the babes provided by the Birmingham Stage School the whole company acts seamlessly as a team – which only goes to show that Director Michael Harrison and Choreographer Alan Harding have done their jobs well.

The audience left the theatre buzzing and contented – it was quite simply five stars to the right and then straight on to – Pantastic!

The show runs until January 27.

GARDENING TIME: ‘Of all flowers methinks a rose is best’