A THOUSAND Splendid Suns, adapted by Ursula Rani Sarmaan, is an epic production in every sense of the word.

This was an amazing set from designer Ana Inés Jabares-Pita who brings the sun burnt landscape of Afghanistan to the REP stage.

It came complete with a myriad of sand dunes, tunnels and rock structures behind which actors can hide and spring out on us – as the tribesmen of this war-torn race have hidden out for centuries in their desolate homeland, taking on all comers. 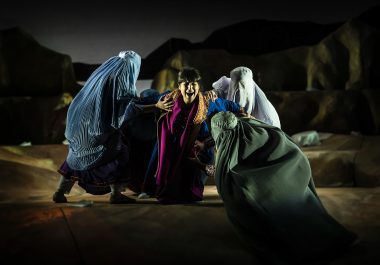 Simon Bonds’ blistering lighting design sees the lights simply bounce off the set making you believe you could easily crack an egg and watch it fry.  There is also an immense panoramic cyclorama which changes with the mood of the story – from happy blue skies to sad and broken, black bomb-clouds.

Upon this canvas director Roxana Silbert paints an epic story (adapted from the best-selling novel by Khaled Hosseini) via a series of fast moving landscapes. Silbert is exceptional in her task – using fine brushwork and at times a trowel to deftly take us on the journey. 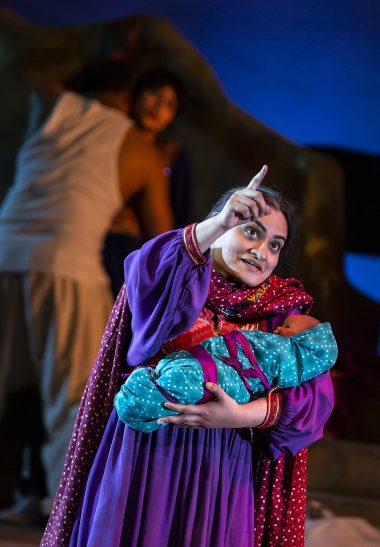 The opening is gentle  – we observe the happiness of a family packing to move home. We learn this is to escape a pending war twixt unknown feuding warlords. The sky is blue and there is laughter, song and dance amidst the sound of occasional distant bombing.

Suddenly this family are the subjects of a direct hit, the only survivor of which is 14-year-old, Laila (a huge tour de force performance from Sujaya Dasgupta).

Orphaned Laila is offered help by middle-aged misogynist neighbour Rasheed (a powerful and oh-so-believable Pal Aron). His proposal is that this barely out of childhood beautiful young girl should become his second wife.

Laila surprisingly agrees much to the understandable angst of first wife Mariam (carried off with convincing servitude by Amina Zia). 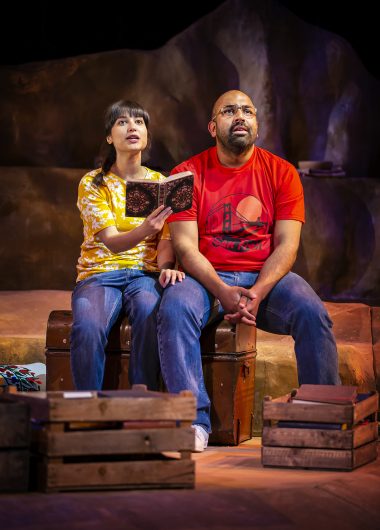 Though they start out as adversaries, Laila and Mariam are destined to become soulmates – to the point that one will forfeit her life in order that the other might have one.

Laila is pregnant when she marries, by the love of her life Tariq, who Rasheed convinces her is dead. Laila for self-preservation lets Rasheed believe he is the father. When her child turns out to be girl, he loses total interest.

The two wives try to run away at the instigation of Laila, but this turns out to be a disaster – their money is stolen, they are arrested and returned to Rasheed, who beats Mariam mercilessly in a long and distressing scene.

Worse is to come through the rise of the Taliban, leading to the few rights women do have being taken away.

The action moves through the Taliban years to several years of domestic abuse  to both wives later. Laila has actually borne Rasheed the son he yearned for and who he is grooming in his own misogynistic image.

Here the story went into the final spiral surrounding Tariq (a dashing Waleed Akhter) and a loud spontaneous vocal reaction from the audience. 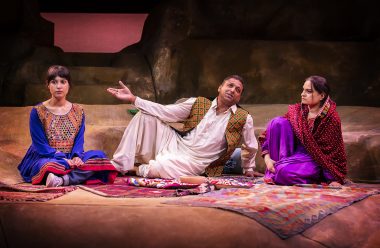 This is a dark and grueling production, which is appropriate for the historical period it covers. It is also about the strength and depth of human spirit.

This is Roxana’s swan song production as artistic director at the REP – she has given us many brilliant productions and ‘A Thousand Splendid Suns’ is a very high note to finish on.

Thank you for Roxana for one final time bringing your own touch of directing originality to a powerful piece of theatre.